I want to thank you for your interest in our program. Allow me to tell you a little more about who we are and what we do.  But first, story time...

When I was five years old, my father was diagnosed with Parkinson’s disease, and life as I knew it shattered. Golf became my escape and my best friend, and I played every day. I met new people and made new friends. When I was ten, I met Leonard Redlich, who became one of the most important people in my life.

My friendship with Leonard is fascinating and perhaps a little bizarre. There are so many similarities between Leonard and my father. To begin, Lenny and my father were the same age, and both became lawyers after studying at the University of Pennsylvania. Both had piercing blue eyes, and both were diagnosed with Parkinson’s disease at the same time. There are two key differences, however. Lenny played golf while my father did not, and Parkinson’s affected him differently than it did my father. My father was bedridden for most of my adolescent life and passed away in August of 2014. Lenny is still alive and continues to be my most important golf student.

As an impressionable kid, I thought golf was the answer to everything. It was my dream to open a series of golf schools and use golf as a therapy for those suffering from Parkinson’s disease. In many respects, I was right on target.

The process of repetitive motor pattern rebuilds brain cells in the hippocampus, and considering Parkinson’s is associated with Hippocampal atrophy; repetitive motor functions (namely golf) seems to be very therapeutic.

One of the most unnerving yet uplifting aspects of Leonard’s golf game was that he would show up at the golf course in what seemed like full body armor, wearing knee pads, elbow pads, and a helmet. Most days, he fell after every shot and then got right back up and headed to his ball for his next shot. 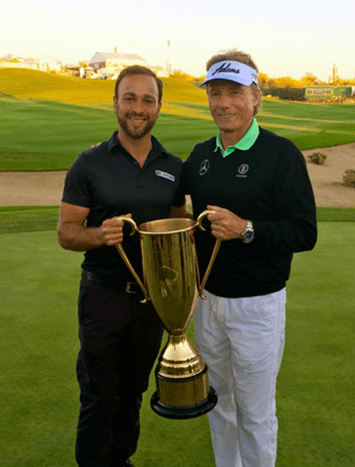 Watching Lenny’s feet on his successful swings, I realized he was able to stay in better balance when he centered his weight further back on his heels. Even though traditional golf instruction teaches us to center our weight on the balls of our feet, the moment we shifted Lenny’s weight off the balls of his feet and back toward his ankles, he was able to swing the club and rotate properly without falling. My observations of Lenny’s successful swings and what I learned studying biomechanics, kinesiology, and anatomy taught me that the balls of the feet are not designed to carry the full weight of the body. When I applied this altered approach to the golf swing to my non-Parkinson’s golf students, I realized it worked for everyone.

Setting aside popular traditions and trends in golf instruction, I began to ask important questions, such as what elements of the body’s anatomical and structural design would allow someone with Parkinson’s disease to play comfortably and consistently. After consulting with the leaders of biomechanics and neuromuscular dynamics at the Mayo Clinic, I was able to develop logical, science-based answers.

I did not start out thinking I was going to revamp the way the game is played. I was merely trying to create an easier way to help Lenny and others afflicted with Parkinson’s disease continue playing golf. Nonetheless, I stumbled onto what is an anatomically effective way of improving anyone’s game, including golfers who have been plagued with shaky hands, weak lower backs, prior injuries, and muscle imbalances. The four body locks explained in the book are now attracting the attention of major championship winners and Ryder Cup members. The AXYS System is literally the unification of anatomy and physics.

Thank you for checking out out program.  I look forward to helping you reach your golfing potential.

To my father, Walter Kaplan. You would be amazed at the brilliant minds that helped develop this putting method to help those who, like you, were diagnosed with Parkinson’s disease. I never would have dreamed this research would attract the interest and gain the trust of some of the best golfers in the world. It is beyond what I ever imagined, and it’s all because of you. You taught me everything. To embrace life. To love the human condition. To find strength in vulnerability. I learned about Parkinson’s, about perseverance, and about putting. You also gave me the greatest gift of all – you believed in me. I love you, and I miss you every day. - Eric Kaplan

Meet Our Medical Board